Eric Winkel contributes a comment on a quotation from the Futūḥāt to the MIAS blog. 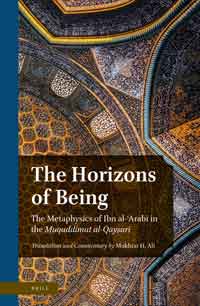 The Metaphysics of Ibn al-ʿArabī in the Muqaddimat al-Qayṣarī
Translation and Commentary by Mukhtar H. Ali

In his introduction Dr Ali says:

“The Muqaddima stands on its own as an independent work and has been the subject of careful study. If the Futūḥāt contains the entirety of Ibn al-ʿArabī’s metaphysics which is distilled in the Fuṣūṣ, then Qayṣarī’s Muqaddima can be read not just as a précis of the Fuṣūṣ but as a summary of Ibn al-ʿArabī’s doctrine.

Qayṣarī writes in the preface to the Muqaddima that without comprehending all of these essential topics, it is not possible to understand the original text of the Fuṣūṣ. It is in light of this approach that he wrote the Muqaddima, which contains what he considers to be the fundamental issues in Sufism, such as Being, the divine names, prophethood, sainthood, unveiling, the Perfect Human and the Muḥammadan Reality.”

It was published by Brill in Hardback and E-Book editions on 18 June 2020. Pages: vi, 257 pp. (English and Arabic)
More information

Two other editions Dr Ali is believed to have in preparation are ‘Abd al-Rahman Jami’s (d.1492) Selected Texts Commenting on “Naqsh al-Fusus” and Haydar Amuli’s (d.1385) The Compendium of Mysteries and Fountainhead of Lights.