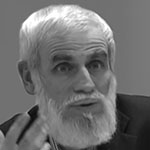 Denis Gril is a scholar, translator, and writer who teaches Arabic and Islamic studies at the Université de Provence in France, where he has been since 1981. He has devoted himself to the study of the work of Ibn Arabi, but also to the study of sainthood within Islam. His other research interests include Islamic spirituality and its scriptural foundations. His published works include translations (along with commentaries) of works by Ibn Arabi: Le Livre de l’Arbre et des quatre oiseaux and Le dévoilement des effets du voyage. Gril has also translated and published La Risala de Safi al-Din Ibn Abi l-Mansur Ibn Zafir: Biographies des maîtres spirituels connus par un cheikh égyptien du viie/xiiie siècle.

Hadith in the Work of Ibn Arabi: The Uninterrupted Chain of Prophecy

Ibn Arabi in Egypt – The Speech of Things

Jesus, Mary and the Book According to Ibn Arabi

“And He taught Adam all the Names”: the Foundation of the Spiritual Caliphate

On 31 March, at his home in Candé, Anjou, surrounded by his family, Michel Chodkiewicz left this world, continuing his journey to his Lord. He was one of the foremost experts on the works of the Shaykh al-Akbar, and most of his writings have been translated into English, along with several of his articles in the Journal of the Muhyiddin Ibn ʿArabi Society (JMIAS).

From the beginning of the 1950s, reading and studying the work of Ibn al-ʿArabī, and all the literature of Sufism, was for him an intellectual and spiritual vocation. Professionally, his career consisted in being an editor, and then a teacher. Having joined the French publishing house ‘Éditions du Seuil’ in Paris at a young age, he held the position of ‘Président Directeur Général’ from 1979 to 1989. His work as a publisher put him in contact with eminent academics, who appreciated his efficiency, extraordinary culture and knowledge of Islam, Sufism and Ibn al-ʿArabī in particular. Thus he was entrusted with lecturing at EHESS (École des Hautes Études en Sciences Sociales) in 1982. In 1989, he retired from Seuil and was appointed director of studies at EHESS. For five years, he taught a course on ‘the history of sainthood in Arabic-speaking Muslim societies’, devoted partly to Ibn al-ʿArabī or some of his successors like ʿAbd al-Karīm al-Jīlī. His classes were attended by a group of students profoundly affected by his teaching, as attested to in the issue of Horizons Maghrébins dedicated to him.[1] He finally retired in 1994, and from public life thereafter. Previously, as publisher and teacher, Michel Chodkiewicz travelled widely and participated in a large number of colloquia and conferences in France, and around the world. Besides his special interest in the works of Ibn al-ʿArabī, he actively participated in several research groups on Sufi paths and sainthood in Islam, often from a comparative perspective. Several articles, as his bibliography shows, bear witness to this. His vast network of knowledge was formed over the course of these travels, scholarly meetings or others; and above all, due to his abundant letter-writing activities. He shared his vast knowledge with a generosity and diligence that surprised his correspondents.

Michel Chodkiewicz began studying the work of Ibn al-ʿArabī under the spiritual direction of Michel Vâlsan. He dedicated The Spiritual Writings of Amir ʿAbd al-Kader to him and paid homage to him in the preface to An Ocean Without Shore. Michel Chodkiewicz’s great knowledge of the Muslim world made him aware of other forms of spirituality, which are reflected in some of his articles. The doctrine of Ibn al-ʿArabī, nonetheless, remains the axis around which all his works revolve. A list of his books and articles is appended.[2]

His books constitute as many introductions or keys to reading the Shaykh al-Akbar. It is therefore not surprising that the first work published by Michel Chodkiewicz was the Spiritual Writings, a selection of texts taken from the Mawāqif of the Emir ʿAbd al-Kader al-Jazāʾirī. This book can be considered as a particularly enlightening introduction to the doctrine of Ibn al-ʿArabī, in its most metaphysical dimension. It is thanks to this translation that the Emir’s spiritual dimension became known to a larger public. The important introduction that precedes it raises, among other things via the Emir’s case, the question of the transmission of Ibn al-ʿArabī’s works and the ṭarīqa akbariyya. By presenting this Akbarian heir that was the Emir, Chodkiewicz notes what brings him closer to Ibn al-ʿArabī: his path of being ‘enraptured in God’ (majdhūb) and the Qurʾānic inspiration of his Mawāqif. These questions would recur in the following works.

The second of his works is also not specifically dedicated to Ibn al-ʿArabī since it is a presentation and a translation of the Risālat al-Aḥadiyya, ‘Epistle of Absolute Unity’, attributed to Ibn al-ʿArabī in several manuscripts and by the first translators.[3] It was not only a question of attributing this risāla to its true author, Awḥad al-Dīn al-Balyānī (d. 686/1288), a shaykh of Shiraz, but more of dispelling two confusions on the doctrinal level, due to this false attribution. In fact, this Epistle is clearly part of the doctrinal lineage of Ibn Sabʿīn, denying any reality other than that of God. It was an opportunity for Chodkiewicz to show how this doctrine overlaps Ibn al-ʿArabī’s in affirming the essential unity of Being, but by leaving aside its necessary counterpart: knowledge of the world and beings as divine manifestations and theophanies. This difference translates into a very different understanding of the tradition, ‘Whoso knows himself, knows his Lord’, whose commentary is the subject of the Epistle and whose different meanings Ibn al-ʿArabī explains so often. We regret that Chodkiewicz did not further develop an exposition of the doctrine of Being according to Ibn al-ʿArabī, which he spoke of as a future project in his introduction (p. 39). Even if others, William Chittick in particular, have tackled it, we still lack a synthesis on this essential and complex issue.

The Meccan Illuminations inaugurated a series of works intended to present the teaching of the Shaykh al-Akbar for what it is, before all else: a way of knowing God, Man and the World, a path of obligation and mercy, perfection and universality, in the measure of its exemplar, the perfect or universal Man and its principle: the Muhammadan Reality. Chodkiewicz only wrote the introduction to this work, an indispensable guide for whoever wishes to undertake reading the Futūḥāt al-Makkiyya. Let us remark that, on the whole, he was far more attached to the study of the Futūḥāt than to the Fuṣūṣ al-ḥikam, even if he refers to it when necessary. Recognizing the often partial approaches to the doctrine of Ibn al-ʿArabī, based solely on reading the Fuṣūṣ, which is more accessible in appearance, he favoured the Futūḥāt which alone allows one, in relation to Ibn al-ʿArabī’s other treatises, to appreciate the Master’s teachings in all their magnitude and nuances. Michel Chodkiewicz was the driving force behind The Meccan Illuminations, engaging workers whose collaboration was an important moment for them. Not without a certain idealism, he wanted to encourage readers to read their contributions in both English and French. It is a shame that the English and French editors did not pay heed, and cut the book in two.[4]

The Seal of the Saints is undoubtedly the work that has enjoyed the widest diffusion. It is addressed just as much to specialists in Sufism and Islam as it is to an audience in search of spirituality. It especially reminds us that even if they borrow some notions and modes of expression from the speculative sciences, the writings of the Shaykh outline before all else, a path of sainthood, the one pertaining to all the masters mentioned in this work, who are heirs to the Prophet and the prophets.

This path ascends and re-descends. The travellers to God follow it through the stages or mansions of the Qurʾānic Revelation, which never ceases to descend upon hearts ready to receive it. This is why the insān al-kāmil and the Qurʾān are brothers, as taught by Ibn al-ʿArabī, and this is why, as heir to Muhammadan sainthood, he could designate himself as ‘the Qurʾān and the seven repeated’, echoing a verse addressed to the Prophet.[5] Michel Chodkiewicz’s last book, An Ocean Without Shore, explains how and why all of Ibn al-ʿArabī’s work is made from the substance of the Qurʾān and structured by it, the Futūḥāt in particular as well as other treatises, and how countless references to the Qurʾān allow us to understand the relationship between certain treatises. We understand from reading this work just how much the universal dimension of his doctrine and the preponderance of mercy in his vision of the world’s becoming are linked to his attachment to the letter of the Qurʾān. It is from the letter that meanings gush forth, and it is in the letters that the Spirit takes shape and becomes word and book. It is in the revealed Law and in the rites in particular, starting with the prayer, that servitude or man’s perfection is realized. The law therefore converges with Supreme Reality, of which it is the manifestation. In this book, Michel Chodkiewicz interprets a doctrine, and above all a message: it is through one’s ‘Verb’ that one approaches God. He left us a legacy; it is up to us to live it and take it on.

[2] This bibliography was essentially compiled by Claude Addas, daughter of M. Chodkiewicz. She is to be thanked here.

[4] Published in two volumes as The Meccan Revelations.